Here's this week's project for Painting Table Saturday. I have entered the '2016 FotM' Painting Challenge'. If you are up for the challenge click on the link and join the community.

This year it's a female character from Lord of the Rings or The Hobbit. No monsters, original base size and no dioramas. So the epic battle where Shelob is blinded by the light of Galadriel's Phial will have to wait.

Here are some Work In Progress photos from my painting table. I am not sure if this will be the miniature I enter but I have done my best to think outside the box. I mean, there aren't that many female characters in the world of Middle Earth!

In choosing a Wood Elf Sentinal miniature I was trying to avoid the obvious and popular characters from the movies.

While arranging some stones I also decided to be creative with the base. Instead of the often used rocky outcrop underfoot, why not a giant skull? 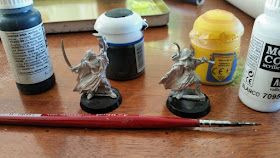 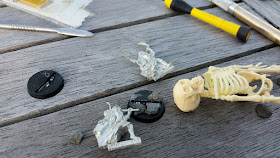 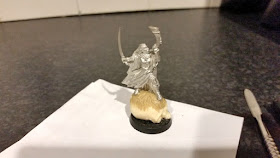 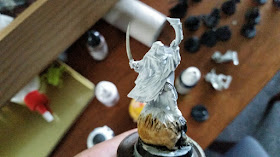 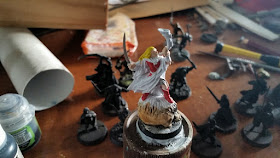 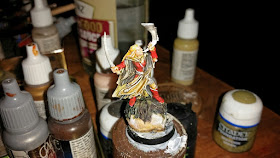 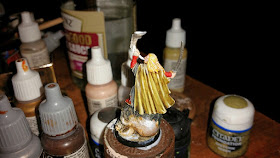 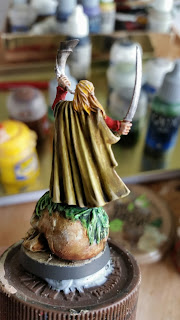 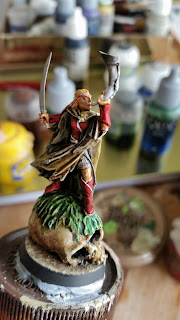 The red was a bold choice and one I initially thought I might paint over. As I continued with more muted woodland tones the red made even more of a statement. She's dangerous and deadly, like latrodectus bishopi, the red widow spider.

Well, at least it's believed to be venomous like it's other relatives. There are no medical records of bites: the red widow is an endangered species from Florida that seldom encounters humans. Sounds like an elf to me.

I have more detail to paint, from her face to her raiment. I also need to flock the base. Any feedback or suggestions are welcome!

Final model submission is on March 31, followed by voting in April. So why not enter yourself?

God bless and enjoy your week!
Darcy Perry at 21:53
Share