What happens when you create two successful Kickstarters, sculpt a few dozen miniatures and launch a new hobby business? You get less time to share your hobby on the good old Hits To Kill blog, that's what! Lewis mentioned the lack of recent activity as I was enjoying a break from my Dungeon Master role last night. The regular Monday Night crew were put through a Dungeon Crawl Classics funnel that Lewis had written himself. It's a fantastic module that will most likely see it's own Kickstarter before Christmas. We were all having a ball,

So what do we play on Monday Nights? D&D, AD&D, DCC, Traveller, Wasteman, Road Wolf, Star Wars, Mordheim, Warhammer 40k, Epic, Bolt Action, Lord of the Rings Strategy Battle Game, and many more commercial and homebrew tabletop RPGs and wargames. We have even played Adventure Time Munchkin! There are plenty of rulebooks (Tunnels & Trolls, Dragon Quest, Rune Quest, MERP, GURPS, etc.) on the shelves that don't come down but hey, I guess we will wait and see. In particular I would love to play Paranoia and Dragon Warriors sometime in the near future. Blair's Traveller campaign would morph into Paranoia easily enough. Although I could easily drop the AD&D characters into Alpha Complex!

I can tell you that for me, the game system doesn't matter. The players matter. Oh, yes, every one of them can referee like a boss (and they bring that mastery to the way they play). More importantly we compete, collaborate and create memorable experiences. I feel blessed to know them and share Monday nights in worlds beyond our own. Sound soppy? Well, it should. Sometimes Monday night is what gets me though the week!

So, here you go Lewis... an update! What's happened since the last post here at the end of February?

March rolled by with plenty of communication with Ian and Allan Farley at Regal Enterprises. They handle all my casting and the metal masters are the first step towards sharing my creations with gamers around the globe. Holding my creations in metal is almost as exciting as sculpting the originals out of putty.

I also tried unsuccessfully to get a license to sculpt characters from the DCC rulebooks. Alas Goodman Games weren't ready to let their characters go. They allowed me to keep Hugh for personal use though. I painted him and gave him to Lewis, I gave away the unpainted metal extras from the spin casting to the backers as a unexpected gift. He won't be available for sale.

April saw the launch of a Star Hat Miniatures website. As a life-long gamer and collector/painter of classic metal fantasy miniatures, I now also enjoy sculpting miniatures for tabletop games. Star Hat Miniatures was born in 2016, after a successful Kickstarter campaign: Delvers Lost in the Dungeons of Doom! A second Kickstarter (Delvers Lost in the Dungeons of Doom! 2!!) launched early in 2017 expanded the initial range of figures to 30 odd weird and wonderful adventurers, ready for your gaming table.


If you see anything you like, or are interested in having your own favourite fantasy character sculpted, please contact me via social media. Because I live in New Zealand (a stone throw from Hobbiton), and all miniatures are cast to order, it may take a few weeks for your order to get to you.

These miniatures are also available at Game Centre in Hamilton, New Zealand. Game Centre also stock a fine variety of brushes and paints for all your hobby requirements. 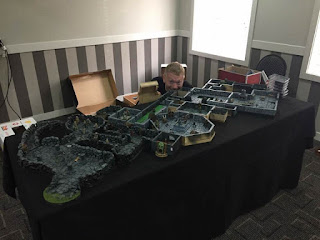 May was a fantastic month! The unpainted pledges from the 2nd Kickstarter were packed with care and sent to their new homes with help from the Box Trolls: Dave, Blair, and Greg. It was awesome to deliver on time! I also traveled to Taupo for Queen's Birthday Weekend to attend LexiCon - an opportunity to hang with some Sci-fi and Fantasy fanatics.

Lewis, John and I were part of a panel that talked about roleplaying games and miniatures. It was cool to see Lewis fill a table with his work so far. A massive dungeon filled with special terrain, trappings and miniatures.

June is here! A week ago a new Kickstarter launched that has me conflicted: Dungeon of Doom.  However, I do believe this is the best terrain available in the US (or anywhere really) - Dwarven Forge is amazing and Stefan Pokorny is an inspiration!

So where is the feeling of conflict coming from? Shipping entire dungeons to New Zealand costs a Dwarven King's randsom! Long ago, Lewis came to me with this Kickstarter: Dwarven Forge's Game Tiles: Revolutionary Miniature Terrain. I said it looked great but since we live in New Zealand, it would cost a ton to get it here... hey, let's just make our own! The result?

We (er, by 'we' I mean 'ew', as in Lewis) make our own terrain (from wood, cardboard and goblin entrails) here and I think that's how it's going to stay unless a 3D printer magically appears one day in the Man Shed...

The Delvers Lost in the Dungeons of Doom! are not related to Stefan's Dungeon of Doom but I received this photo from a backer that showed how well they go together:

How does our DWARVEN FORGERY™ compare? Here are some photos from last night's game: 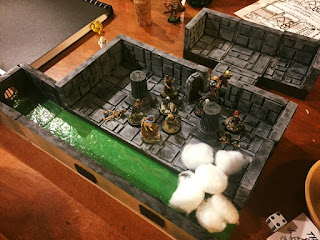 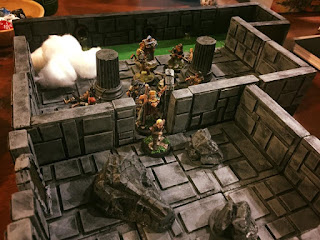 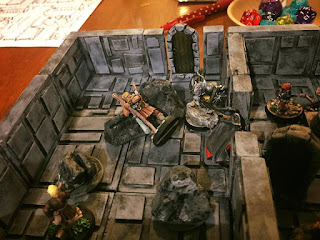 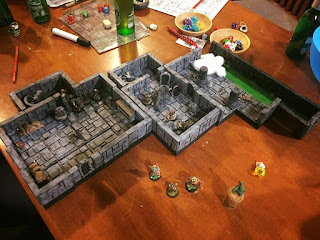 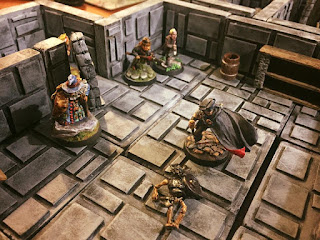 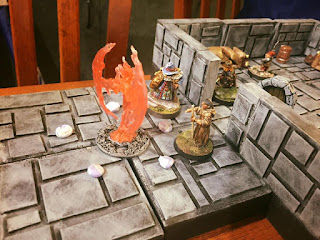 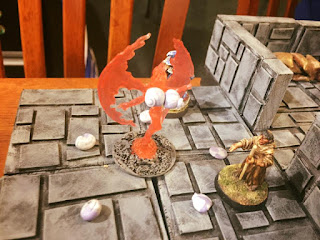 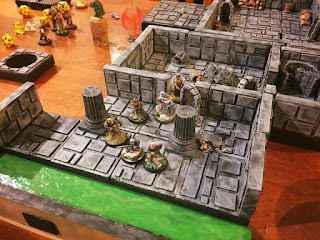 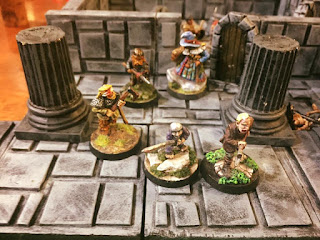 Until next time, God bless you and happy gaming!
Posted by Darcy Perry at 03:09 1 comment: