Here we are in the final week. What can I say, the support for this Kickstarter has been amazing! Here is the main Dragon Slayer Pledge Reward with 11 miniatures so far and more to come:


I have never reached a point like this in a Kickstarter where I have felt so much passion for (and been committed to) sculpting some of the most wonderful miniatures for you. As you can tell, I really enjoy sculpting. I thank God for this new skill and honestly, there is a satisfaction that comes from creating what my beloved wife calls "little men".

So what's been going on? Well, it's lambing season and we got another set of twins this morning... oh, and we also unlocked Drake, a duck that was inspired by the Durulz from Runequest. Funny thing is, Jennell Jaquays - legendary artist and game designer - found my post on Facebook and shared it. To be complimented by her was an unexpected surprise! However, it was her art that inspired my sculpt...


I didn't really know the history of how ducks became part of Runequest but it appears that Archive Miniatures produced a Barbarian Duck and his Lady (before Runequest). Later, Greg Stafford and his friends added the Ducks/Durulz to Glorantha so people could use these miniatures in their games!

I had a lot of comments on Facebook and here on Kickstarter about Howard the Duck, mainly the rather weird movie from 1986. Here is the comic that inspired that Duck Barbarian miniature (from 1976!)


Ducks aside, the next Legendary Hero is bound to make a splash!

7 days to go! Please continue to spread the word on your Social Media - There are updates on the Facebook page: https://www.facebook.com/StarHatMiniatures/

Let's Unleash The Dragon together before the week is done!

God bless you and enjoy your gaming!
Posted by Darcy Perry at 14:44 No comments: 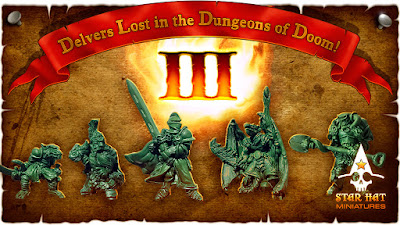 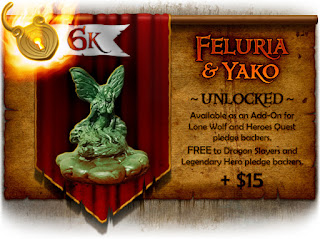 Feluria and Yako were not always the inseparable duo you see today. They both seem to have the same care-free, whimsical attitude about the world.

Yako had always been a prankster, travelling from his favorite fields to create mischief in the nearby sleepy villages. When he judged the time was right, Yako would pull pranks and make it seem like an unsuspecting villager had been the one to pull them.

One day he went too far. Yako made the mistake of digging out a bit of dirt near the town apothecary. This caused a section of the wall to fall out, crashing into the village center, where the well which provided water for the entire village was.
Shelves full of many different concoctions fell into the well, from which erupted an angry water elemental!  Polluted by the potions, the once benevolent elemental water elemental demanded the one responsible to come forward and face judgement or it would destroy the whole village.

A frightened apprentice stumbled from the rubble, drenched in the perfume of various salves and ointments, while terrified villagers stood rooted in terror. Just as the water elemental was about to pass judgement Yako leaped in between the two; facing down the elemental and conveying he was the one responsible.
The sentence for polluting a water spirit was death and Yako knew this. He was fine with people taking the fall for petty pranks but letting someone die from his tom-foolery was out of the question. As Yako stood there ready to accept his fate, a fairy appeared and petitioned to be his guardian!

Feluria had been tailing Yako for a very long time, albeit unseen from afar as his occasional companion. Upon birth intelligent beings such as Yako are assigned a watcher fae (as they can be destructive if uncared for).

Being a watcher was common enough. A fae becoming a guardian was by far a more rare occurrence. They had to feel a true sense of empathy for a creature; which could be difficult considering how often their view of the mortal world shifted. Yako took after Feluria's own heart; a spirit of nobility and liberty that knows no bounds.

Whether moved by Yako's gesture or Feluria's plea it remains unknown. The elemental allowed Yako to live but only as long as they were bound as mistress and familiar. Ever since that fateful day Feluria and Yako have been inseparable, though sometimes only by force of the magical bond set upon them.

The funding from this Kickstarter will pay for the moulds and casting of at least 8 new miniatures. Legendary Hero pledge backers will unlock more miniatures from 5k onwards. Reaching 10k funding will unleash The Dragon! 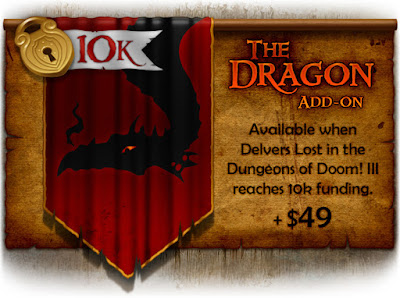 Delvers Lost in the Dungeon of Doom III https://www.kickstarter.com/projects/darcyperry/dungeons-of-doom-iii-dragon-slayers-star-hat-minia

What are you waiting for? Let the adventure begin! We're going on a Dragon hunt!
Posted by Darcy Perry at 16:43 No comments: