A fantastic start to the NZ Festival of MindSports in Thames this weekend with Tunnels and Trolls added to the roster of games, thanks to Mark Thornton stepping in as a Game Master. I also returned as Dungeon Master with some superb DWARVEN FORGERY™ terrain for an exciting session of Dungeons & Dragons.

With the North Island Wargaming Convention happening in the same building, there was a whole lot of gaming going on! Ancients, Flames of War, Warhammer (Fantasy Battle and 40K), Warmachine/Hordes and plenty more. I took some time to wander around the tables and take photos. Lots of eye candy.

There was also an enterprising young entrepreneur named Richard Morita and his new Edo Jidai - Duelling Samurai game. I had a great time chatting to him about how the game came about and his plans for the future. I also ended up going home with a copy. Thanks mum!

At my table, the D&D game was full of mirth and youthful enthusiasm. Special merit goes to Honour. Her wizard managed to counter the beastman shaman's spell and turn his fire elemental against him (and then kept it as a pet). Thanks and blessings also to Mark Thornton, a veteran gamer, a scholar and a gentleman. I can't wait for the games next weekend! 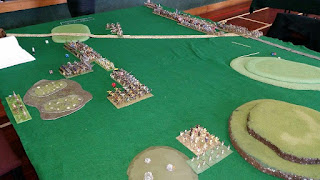 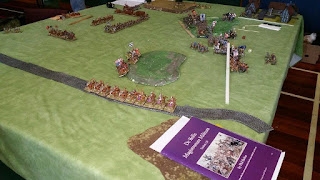 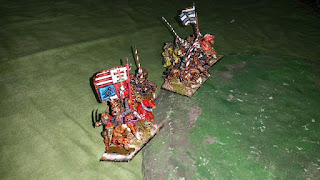 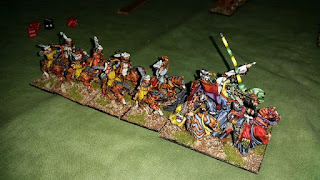 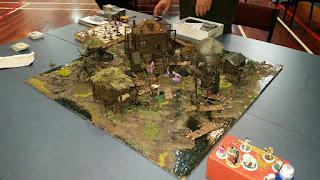 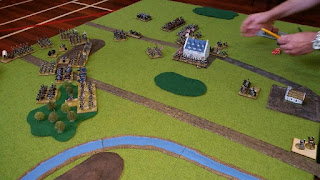 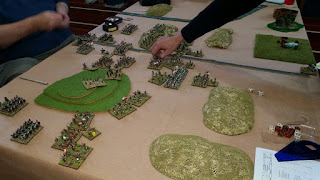 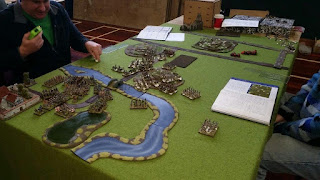 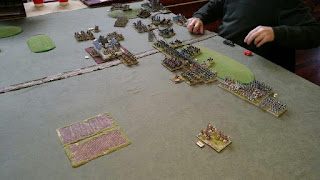 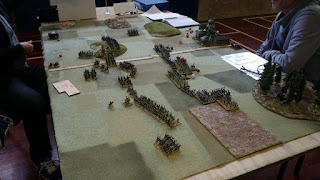 God bless you all and see you next week!
Posted by Darcy Perry at 21:49 3 comments:

Plenty of action on this Painting Table Saturday (edition 81) with the classic 1980's Citadel Vikings almost finished, along side some Lord of the Rings fighting men of Rohan.
Háma and Gamling to be precise. These miniatures have benefited from some fantastic shields courtesy of my good friend Lewis.

I've run low on round shields and have been improvising with scratch built replacements made from plastic and putty.

Also on the slow burn are some old 1980s Orcs and some new Hassle Free miniatures, plus a few more Lord of the Rings Uruk-Hai for my growing band of Morgul Orcs.

God bless you and have a great week!

Thanks and blessings to Greg Gorgonmilk and Richard LeBlanc. Henceforth I shall call him Sir Richard, the White Knight.

"Compiled from the writings and illustrations of many different authors and artists, this 370+ page tome is a fabulous resource for any fantasy RPG games-master."


There are some big names in this book! I'm honoured to be among them. Along with the more famous contributors are my kiwi mates, the renowned writer Grant Stone and artist extraordinaire Rom Brown.

PDF - without watermark!
(FREE through RPGNow)
Click Here
Posted by Darcy Perry at 03:39 No comments:

Email ThisBlogThis!Share to TwitterShare to FacebookShare to Pinterest
Labels: Dungeons and Dragons, Roleplaying 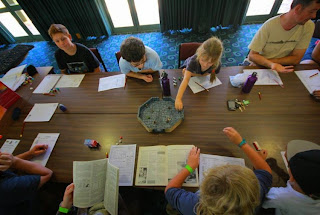 Welcome to the return of the New Zealand Festival of MindSports!

It's back! Last year was a great success and this year the games run over two weekends, including events during the week. The MindSports festival is full of activities for all ages.

This year Dungeons & Dragons will be joined by Tunnels and Trolls with Mark Thornton stepping in as a Game Master.

Check the Thames Information Centre for accommodation in Thames and many things to see and do in Thames.

Email ThisBlogThis!Share to TwitterShare to FacebookShare to Pinterest
Labels: Dungeons and Dragons, Roleplaying, Tunnels and Trolls

Welcome to my humble contribution to edition 80 of Painting Table Saturday, the g+ miniature gaming community I joined 65 editions ago, with thanks to Sofie. Although I began posting photos of my miniature collection on Hits To Kill back in September 2012 (with a dozen Tharks and a Jeddak riding his Thoat), it's the Painting Table Saturday group that has kept me painting each week since February 2014. I've also discovered a great deal more about my boyhood hobby as I continue to enjoy painting miniatures from my youth.

So, how are the state of things in The Man Shed today? Well, I still have a mountain of unpainted lead! Here is the soul survivor from a Grenadier boxed set, Monster Manuscript 1509. I have a lot of these miniatures as they were available around the time I began playing Dungeons & Dragons. I didn't know that these weren't official D&D miniatures. Apparently the Monster Manuscript (and Fantasy Lords) line was Grenadier's one finger salute to TSR after they lost the AD&D miniatures license.

TSR had decided to produce miniatures themselves. After years of Grenadier creating miniatures from the Monster Manual, they made a selling point of producing "that's not in the books" miniatures for DMs who wanted something new to scare the players. Ten of the most-obviously AD&D monsters were eventually repackaged into a Dungeon Dwellers set.

Here is a complete list of the Monster Manuscript 12-box series courtesy of miniatures-workshop.com

As I said earlier, I wasn't aware of this when I started collecting these miniatures. Many of the monsters had similar names to the AD&D Monster Manuals and D&D Basic & Expert sets. The few unique monsters reminded me of creatures from the Fighting Fantasy gamebooks. There were even booklets available with the Grenadier catalogue that included stats not unlike AD&D monster descriptions, with HTK (Hits To Kill) instead of HP (hit points). The artwork was akin to what you might find in a White Dwarf magazine back then.

Here are some more photos of the Rhino Man, or Rhinshasa, taken with my Samsung S5 against a blue sky with the flash on. Simple but effective photography! All you need is a sunny day and a cloudless sky.

He is on a 30mm base, to accommodate his size. 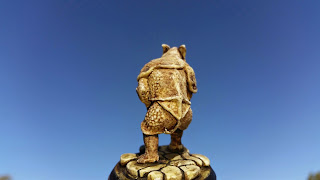 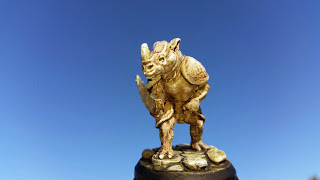 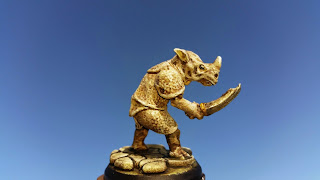 Otherwise, my painting table has the following works in progress; some Citadel Vikings, a Chaos Knight and a 1985 Eomer! A classic fighter by Mirliton Miniatures which had the Lord of the Ring rights with Citadel Miniatures back then.

God bless you and have a great week!
Posted by Darcy Perry at 15:56 No comments:

Email ThisBlogThis!Share to TwitterShare to FacebookShare to Pinterest
Labels: Citadel, Dungeons and Dragons, Grenadier, Lord of the Rings, Painted Miniatures

BB King has died in his home in Las Vegas at the age of 89.

Rest in peace Mr Riley B King.
Posted by Darcy Perry at 01:03 No comments:

Another Painting Table Saturday, as the year keeps on rolling! Winter sports have also begun, keeping the family busy with netball and hockey. I will do my best to keep the painting table active over the winter months and finish off some long running projects. Last week on Painting Table Saturday I was painting Orcs for the Lord of The Rings Strategy Battle Game. I now have over a dozen painted and decided to finish painting this old Grenadier Giant Orc as a reward. I bought this miniature new when I was in my teens. It used to be green. However, to match my new regiment of Morgul Orcs, I went with a new colour palette.

This may be a Julie Guthrie sculpt? If anyone knows, I would appreciate the information. Obviously the original weapon broke off at the hand and is long gone. I have no idea what it was but from memory I suspect it was a maul or warhammer of some description. I replaced it with a Games Workshop sword off a Chaos Warrior plastic sprue. Funny how well it fits. GW miniatures are getting bigger and bigger with each passing year!

I flocked the base with winter grass and a mix of light and medium green moss and left plenty of stony ground. For a sense of scale, there is also a decapitated plastic orc head at his feet.


God bless you and have a great week!
Posted by Darcy Perry at 18:13 No comments: