A sad week for D&D fans as we mourn for David Trampier. His art defined old school D&D for me and millions of other gamers. I spent some time rereading old Wormy and flicking through some books on the shelf, taking in the beauty of D.A.T.'s art. I am fairly certain that his black and white drawings of monsters and mayhem are etched into my subconscious!

After some quiet contemplation I decided to dedicate my Saturday painting to him. God bless you David. Rest in peace.

So, here is Painting Table #21. I managed to complete some Grenadier miniatures that have been on the table for a long time. I also completed a Dwarf Lord of Legend and an Elf Lord that was a birthday present from two years ago.

Please forgive my amateur photography. Thanks again to Sofie.

From From Wikipedia, the free encyclopedia:

"The late Dave A. Trampier was a former artist and writer who worked on some of the earliest editions of the Dungeons & Dragons role-playing game, and who was the creator of the Wormy comic strip that ran in Dragon magazine. He signed his work with his initials "DAT" or with "Tramp". David Trampier, 59, died at 10:58 a.m. Monday, March 24, 2014, in Helia Healthcare."

I read about this first on Dyvers and then The Cryptic Archivist. It appears to be true and is indeed very sad news. His work speaks for itself. I can't imagine the game without his contribution. I was also a big fan of Wormy.

I had read about his disappearance from the gaming community and such. I (like many, many others) was hoping for a return. Alas, this can no longer be. Leave a message here if you're a fan: https://www.facebook.com/groups/200157420067/

God bless you David. Rest in peace.
Posted by Darcy Perry at 03:33 1 comment:

Email ThisBlogThis!Share to TwitterShare to FacebookShare to Pinterest
Labels: Dungeons and Dragons 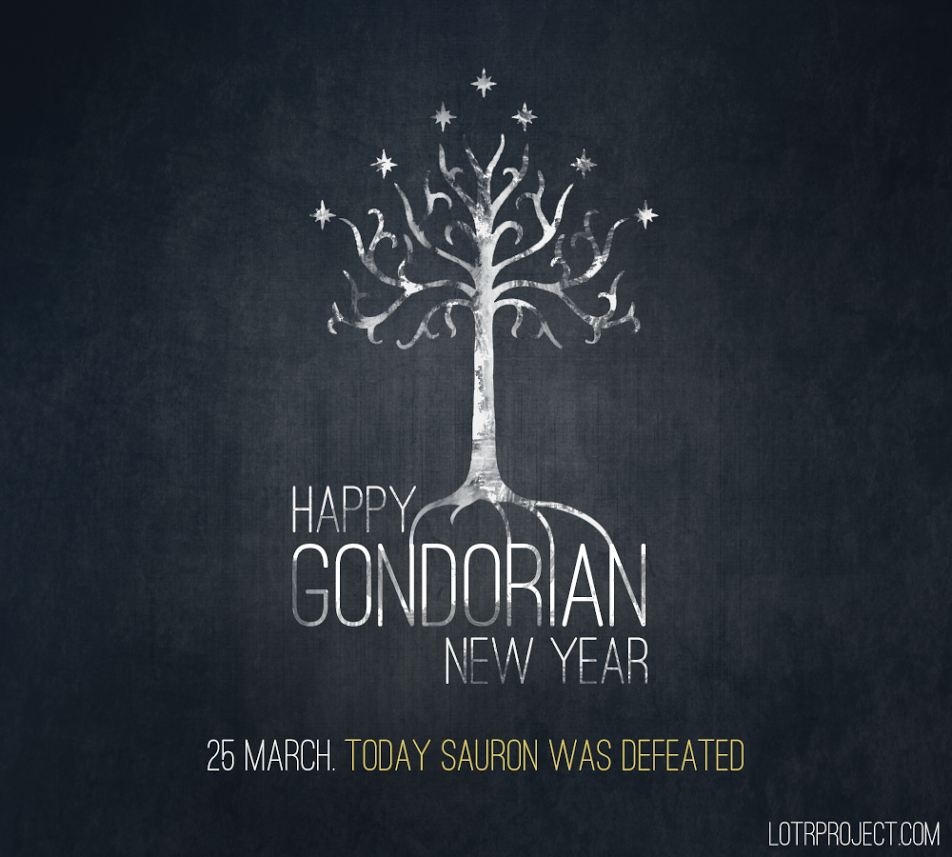 As a Tolkien fan since childhood, I could not resist sharing these quotes from lotrproject.com

“A man that flies from his fear may find that he has only taken a short cut to meet it.”
- Sador, on loosing a leg by accident after fleeing battle, in The Children of Hurin, The Childhood of Túrin
“If more of us valued food and cheer and song above hoarded gold, it would be a merrier world.”
- Thorin II Oakenshield in The Hobbit, The Return Journey
“He often used to say there was only one Road; that it was like a great river: its springs were at every doorstep and every path was its tributary. “It’s a dangerous business, Frodo, going out of your door,” he used to say. “You step into the Road, and if you don’t keep your feet, there is no telling where you might be swept off to.”
- Frodo Baggins in The Fellowship of the Ring, Three Is Company
“There is nothing like looking, if you want to find something. You certainly usually find something, if you look, but it is not always quite the something you were after.”
- Thorin II Oakenshield in The Hobbit, Over Hill And Under Hill
“War must be, while we defend our lives against a destroyer who would devour all; but I do not love the bright sword for its sharpness, nor the arrow for its swiftness, nor the warrior for his glory. I love only that which they defend.”
- Faramir in The Two Towers, The Window on the West
“All we have to decide is what to do with the time that is given us.”
- Gandalf in The Fellowship of the Ring, The Shadow of the Past
“It is useless to meet revenge with revenge: it will heal nothing.”
- Frodo in The Return of the King, The Scouring of the Shire
“It is not our part to master all the tides of the world, but to do what is in us for the succour of those years wherein we are set, uprooting the evil in the fields that we know, so that those who live after may have clean earth to till. What weather they shall have is not ours to rule.”
- Gandalf in The Return of the King, The Last Debate
“Elves seldom give unguarded advice, for advice is a dangerous gift, even from the wise to the wise, and all courses may run ill.”
- Gildor in The Fellowship of the Ring, Three is Company
“The world is indeed full of peril, and in it there are many dark places; but still there is much that is fair, and though in all lands love is now mingled with grief, it grows perhaps the greater.”
- Haldir in The Fellowship of the Ring, Lothlórien
“Many are the strange chances of the world,’ said Mithrandir, ‘and help oft shall come from the hands of the weak when the Wise falter.”
- Gandalf in The Silmarillion, Of the Rings of Power and the Third Age
“It is perilous to study too deeply the arts of the Enemy, for good or for ill.”
- Elrond in The Fellowship of the Ring, The Council of Elrond
“Deserves it! I daresay he does. Many that live deserve death. And some that die deserve life. Can you give it to them? Then do not be too eager to deal out death in judgement. For even the very wise cannot see all ends.”
- Gandalf in The Fellowship of the Ring, The Shadow of the Past
“Such is oft the course of deeds that move the wheels of the world: small hands do them because they must, while the eyes of the great are elsewhere.”
- Elrond in The Fellowship of the Ring, The Ring Goes South
“Deeds will not be less valiant because they are unpraised.”
- Aragorn in The Return of the King, The Passing of the Grey Company

“All that is gold does not glitter,
Not all those who wander are lost.”
- Poem by Bilbo Baggins in The Fellowship of the Ring, Strider
Posted by Darcy Perry at 11:31 2 comments:

Email ThisBlogThis!Share to TwitterShare to FacebookShare to Pinterest
Labels: Dungeons and Dragons, Roleplaying, The Hobbit, Wargames

I'm proud to be a part of the 20th edition of Paint Table Saturday! Thanks Sofie!


So, a few balls in the air at once here. I may use the giant as an incentive to finish the other miniatures on the table. I've been experimenting with different washes. Especially the colour purple. Overall a satisfying Saturday at the Painting Table!
Posted by Darcy Perry at 15:20 1 comment:

Celebrating St. Patrick's Day in style with a green theme. My Tharks versus Phil's Ivory Hunters in a game resembling Space 1889. It's always a fun game when Lewis is referee!


The beginning of a campaign?
Posted by Darcy Perry at 12:20 1 comment:

At last! I have finished painting these classic Grenadier Bugbears. I bought these in the 1980's and though they deserved a new paint job.


Often overlooked as a foe, Bugbears are classic D&D cannon fodder. Tough, nasty and clever, these make an excellent alternative to Orcs on the random wandering monster table. I tend to run them as barbaric beastmen.
Posted by Darcy Perry at 20:56 2 comments: