As I come to the end of the month, it is time to farewell #RPGaDAY. It feels like Deja Vu, due to this Blog Hop from February. After rolling random results with a D30 for the previous two weeks, these are the lucky last questions:

13. Most memorable character death
Covered on the 40th Anniversary of D&D blog hop from earlier this year.

16. Game you wish you owned
Purely as a fan, the original 7 books of D&D would be great. I've seen them but never owned them. I had the chance to buy the first two boxes of Warhammer Fantasy and decided not to. I now kind of regret it, even though I never played Warhammer 1st edition. I very much doubt I'd have turned down the original white box of D&D though.

Perhaps one day I will find them in a garage sale for a few bucks and grin like a cheshire cat.

19. Favourite Published Adventure
The Isle of Dread is incredibly versatile. It's my goto module for games on the fly. Like most of the early D&D tournament modules, you can take what you want and run with it. I've always wanted to DM Night's Dark Terror.

27. Game You'd like to see a new/improved version of
Well, it happened already. A new edition of D&D. Unlike 4th edition, which I didn't buy into, I've been playing D&D 5e over the last month and it really is superb. We're using the adventure from the Starter Set, Lost Mine of Phandelver. The Players Handbook finally arrived in New Zealand last week and I showed it to the group at today's game. Young eyes were wide open with excitement. I think it's flimsy pages are going to take a hammering! I wrote a review on the 5th edition D&D Players Handbook here. 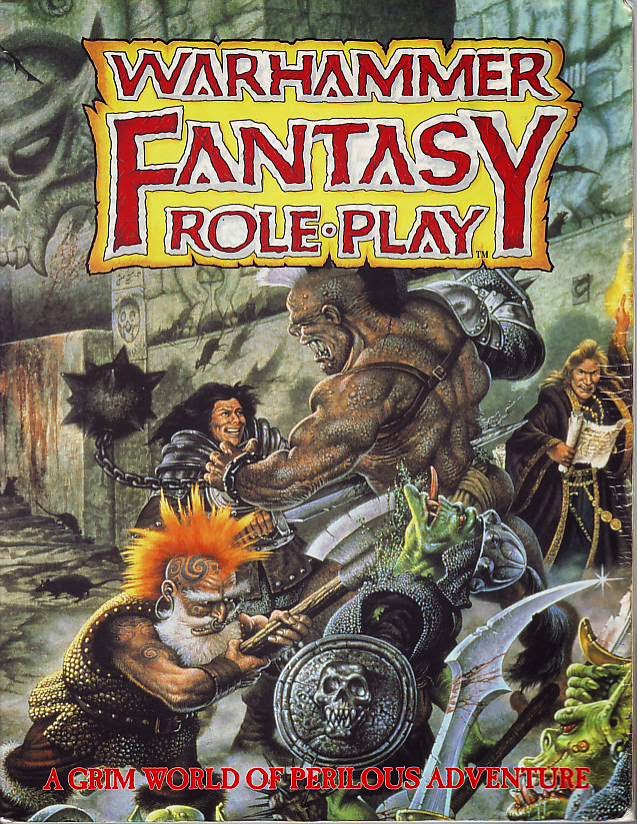 28. Scariest game you've played
Warhammer Fantasy Roleplay. I don't recall being truly scared playing an RPG but Steve Chadwick ran a spooky Warhammer campaign. Come to think of it, horror was a theme for his Dragon Warriors and GURPS campaigns as well. I played and ran Vampire in the 90s and it wasn't as scary as playing in Steve's games.

I have scared some players silly running the old school module Tegal Manor (with D&D 3rd edition). It's all about building suspense. The thought of 'what might be about to happen at any moment' is far scarier than 'what's happening right now'. Empty tunnels with distant sounds of scraping, swarms of little furry creatures fleeing something, or the aftermath of a murder are more frightening than a room with five orcs armed with sword and shield.

30. Rarest RPG Owned
I'm not sure. Maelstrom is quite rare and I can't seem to find my copy. I also have MERP, Dragon Warriors, Tunnels and Trolls, (Advanced) Fighting Fantasy, Mordheim... and others that would be classed as rare. The oldest RPG I own is the Holmes edition (1977) of Dungeons and Dragons printed the same year as the 1st edition AD&D Monster Manual, which I also have on the shelf beside it's companions; the Players Handbook (1978) and Dungeon Masters Guide (1979).

31. Favourite RPG of all time
Dungeons and Dragons.

Another... Painting Table Saturday and I've finished some monkeys for Lewis. I also have some goblin wolf-riders under the brush for his collection of green-skins. Three of my six Citadel pre-slotta base Knights and Chaos Warriors are almost done. Some snakemen are on the table too. It's been a full day!

Peace be with you. Enjoy your weekend!
Posted by Darcy Perry at 15:19 5 comments:

I bought the Dungeons and Dragons 5th Edition Players Handbook this week. It took a while to hit the shops here in New Zealand, apparently due to third-party distributors. After shelling out $40 for the Starter Set as a birthday present for a young gamer, $70 (US $59) for the Players Handbook seemed reasonable, even though it's twice the price I would pay online from Barnes Noble or Amazon. Here is my review, which is perhaps the first from my country, where we are known for Rugby, Sheep and the Lord of the Rings and Hobbit Movies. Oh, and Lorde, mustn't forget her.

In my hands, the 5th edition of my favourite game, Dungeons and Dragons. A solid looking book, all shiny except for half the back cover, especially designed to collect fingerprints. Curiously, the powers that be decided to use the same pamphlet-grade paper that the starter set consisted of. The pages are super thin and feel fragile compared to the sturdy cover. They are certainly thinner than any other rulebooks on my shelves. I hazard a guess at the page weight, maybe 90GSM? It feels more like 80GSM. These flimsy pages are also suffering from a ripple effect that I suspect will only worsen with time. A shame really because the full colour art and illustrations deserve quality paper.

An unusual practice for me, I started reading from the back of the book. Thus, the first page I read was an advert for the starter set and the books to follow this one. Then some character sheets that purely from a graphic design background, leave me wishing they had allowed for the binding. When photocopying these for a game, you won't get the whole sheet because of the layout. Obviously they are just included to look at, in which case they could have been filled in with an example character. Character sheets should be downloaded from DungeonsandDragons.com if you want the whole sheet.

After the character sheets comes an index in what looks like 6 point text. Tiny! Just looking at the page is a headache. I dare not do it under poor light during an evening roleplaying session. Then comes a familiar page of suggested reading material to inspire your gaming. The fantasy works listed look to be a mix of those from the classic 70s edition list (introduced by Gary Gygax) and the D&D inspired fiction written by various authors during the following decades, with something for every level of reader. I spotted books I read as a kid in the 80s (and may never read again)!

Eight pages of creatures follow, with game stats, of pets or companions for players with characters that can call (or even turn into) beasts both mundane and magical. Then it's all about the planes of existence and deities of the multiverse; D&D fiction mixed with historical religions. This section ties in all the editions of D&D rather neatly.

The three pages devoted to conditions of incapacitation that may befall your character are peppered with humorous illustrations. It spells out the penalties of everything from blindness and being charmed to complete unconsciousness.

At this point, leafing through the flimsy pages backwards, I was hit with ninety pages of spells and magic. That's a book in and of itself! Seriously impressive stuff and it continues the D&D legacy of spellcasting with some surprises.

I guess the other chapter that you expect well-detailed in D&D is combat and the Players Handbook explains this in a step by step way that new players can pick up easily. It seems to have a mix of different D&D editions also. I never played 4th edition but I can see some elements from 3rd making it into 5th.

While reading the next section about how to play your character and explore the fantasy world I realised this humble adventurer was only at the halfway mark! I light footed it through the next few chapters and bless my soul, the first half of the book is all about character creation. That's a whopping 160 or so pages! Everything you need and a whole lot you probably won't, to create the character of your dreams and your DM's nightmares.

Do I really need this book to play the game I love? No. I have plenty of rulebooks but it's the players (and dungeon masters) with healthy imaginations and good humour that make this game an enjoyable pastime. However, this book has more resemblance to the role playing games I grew up with than the last edition of D&D. The artwork throughout is superb also. Although the Halflings look like T&T Leprechauns! What happened to their feet? Bring back the hairy, big-footed Hobbits of old!

I see this book as the brave new world that 4th edition promised but didn't deliver and a new hope for the next generation of Dungeons and Dragons players. I expect they will be using iPads or tablets, so the physical quality of the book won't be an issue. May it be the beginning of their golden age of gaming!

After all, that's what it's all about. Getting together with friends and having fun.
Posted by Darcy Perry at 00:30 2 comments:

Monday night, game night! The Tamahere Officers' Club was flying high with a game of Wings of War (now called Wings of Glory), a game series which merges card and board game mechanics including optional scale miniatures, to recreate World War I (or World War II) aerial combat﻿. Lewis brought his terrain cloth and miniature planes, Dave brought the themed beers. We had three missions and these photos don't do justice to the hilarious evening of japes, jibes and bad accents. A great time was had by all.