I dug out my Tunnels and Trolls book yesterday (although I forgot to put it in the car) and headed off to Miranda, for what proved to be a most enjoyable day of roleplaying. I played a Hobbit called Clegg the Remarkable, alongside another Hobbit, two Fairies, an Elf and a Wizard. Actually we were mostly spellcasters of one sort or other. Ahmen's character was the only human; Deadly Vapours, a ghostly character barely holding onto existence after an unfortunate magical catastrophe in his Wizardly past.

The only Warrior amongst us was Clegg's cousin, Felen. Upon meeting Clegg she informed him that their entire family had died in a fire. Later this story changed to death by falling cows. Or was that flaming cows? Charlie's character Felen turned out to be a pyromaniac, although she had help keeping this under control.

Gathering at The Jasmine Dragon Tea Rooms, this unlikely party had a Jack and the Beanstalk type adventure that involved all manner of fantasy tropes bent and twisted beyond recognition. A thoroughly delightful day, with Mark Thornton at the helm, an excellent gamemaster and a good friend of Ken St. Andre. It turns out Mark (and his son Charlie), write solo adventures for Tunnels and Trolls.

Obviously with that sort of game mastery, it didn't matter that I'd left my rule book behind! Characters were created with a mix of point buy and dice, resulting in a group of characters that were quick and smart but not particularly tough or strong. Due to the party being low on brawn, some player expertise was required throughout the game - light on combat and heavy on exploration and negotiation. Saving throws were used for the few skirmishes but there was very little in the way of toe-to-toe slug matches that you might experience in a game with more frontline muscle.

Memorable moments include the fairies, Marmaduke and Fay, healing the Elf's head wound. The Elf Gohan had fallen badly through a trap door. Marmaduke applied his 'lucky' first aid talent using straw and bandages with almost fatal effect. Fay then used her 'faith' healing ability and brought Gohan back from the brink. Later the brave Felen killed a charging giant chicken. No mean feat for a Hobbit armed only with a knife! Gohan and the Fairies freed the Giant's wife from a life of servitude and domestic violence while my own character found a magic ring (which can animate bones) and talked the Giant into descending the beanstalk for a cup of tea.

After the game I also played some guitar with Ahmen. All and all a great day with some fine folks!
Posted by Darcy Perry at 14:50 No comments:

Email ThisBlogThis!Share to TwitterShare to FacebookShare to Pinterest
Labels: Roleplaying, Tunnels and Trolls

Painting Table Saturday 25 + The Battle of the Five Armies 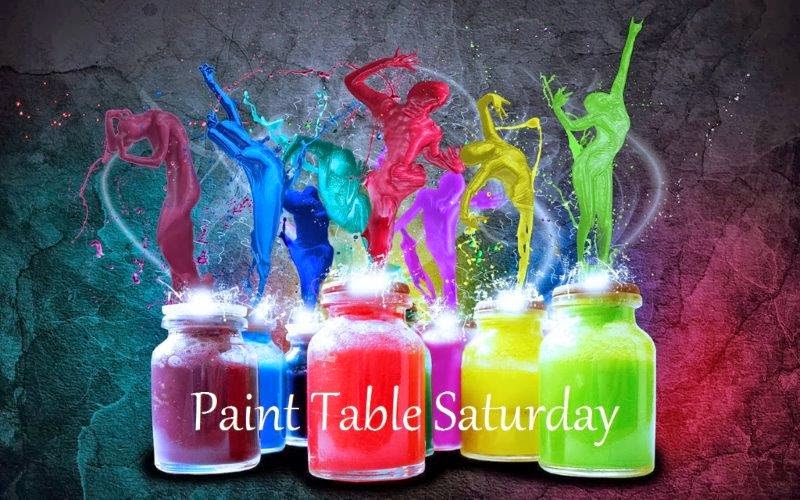 Well, if you missed the news this week, Peter Jackson has named the third movie in The Hobbit trilogy after The Battle of the Five Armies. It makes a lot of sense, as this film will be all about that final battle. Another battle closer to home will be painting the 10mm Battle of Five Armies miniatures before Christmas!

The Hobbit + The Battle of the Five Armies 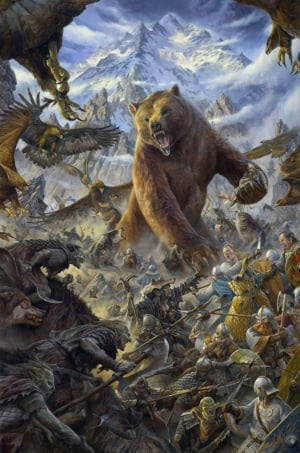 The third film in The Hobbit trilogy has been titled The Hobbit: The Battle of the Five Armies.

"Our journey to make The Hobbit Trilogy has been in some ways like Bilbo's own, with hidden paths revealing their secrets to us as we've gone along. "There and Back Again" felt like the right name for the second of a two film telling of the quest to reclaim Erebor, when Bilbo's arrival there, and departure, were both contained within the second film. But with three movies, it suddenly felt misplaced after all, Bilbo has already arrived "there" in the "Desolation of Smaug".

When we did the premiere trip late last year, I had a quiet conversation with the studio about the idea of revisiting the title. We decided to keep an open mind until a cut of the film was ready to look at. We reached that point last week, and after viewing the movie, we all agreed there is now one title that feels completely appropriate."

A better title in my opinion. There and Back Again was fitting for the book and indeed the trilogy as a whole. However, the third film will be all about The Battle of the Five Armies.
Posted by Darcy Perry at 14:12 No comments:

Email ThisBlogThis!Share to TwitterShare to FacebookShare to Pinterest
Labels: The Hobbit

There are seven days left for the One Page Dungeon Contest deadline. I have noticed this and decided I should enter, especially since it looks like a fun way to be creative and will test my DM powers, all within a tight time frame.

Anyone else out there up for the #1pdc challenge? The information you need to know is on the dedicated page to the 2014 Contest.
Posted by Darcy Perry at 17:39 No comments: 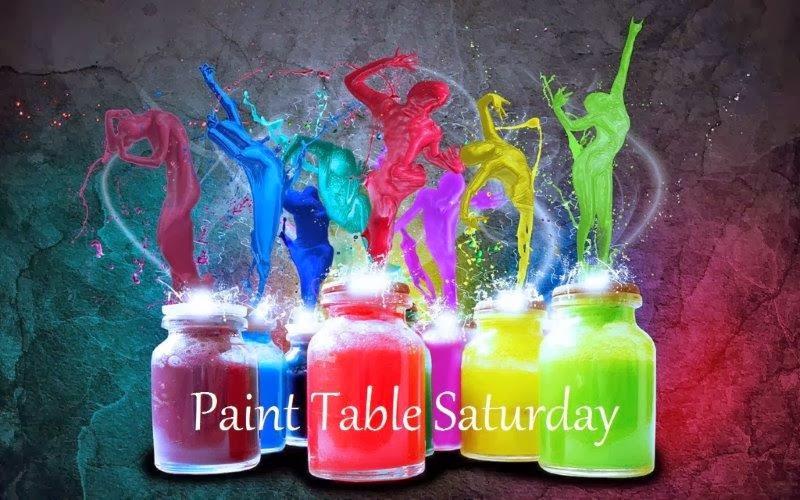 Welcome to the Man Shed, as part of Sofie's Painting Table #24. I may have taken on a task beyond my capabilities here but I love a challenge! If it weren't for a childhood love of The Hobbit (and Fighting Fantasy books), I probably wouldn't be a gamer. Now I've come to the real test of champions. Painting 10mm miniatures for the Battle of Five Armies. My good friend Lewis gave me this box and I hope to have the armies ready for the table by Christmas...

Email ThisBlogThis!Share to TwitterShare to FacebookShare to Pinterest
Labels: Lord of the Rings, Painted Miniatures, The Hobbit, Wargames

Monday night action with another game of Blood Bowl! Phil was playing the Orc side and I had the ratty Skaven. For extra fun, we each played a seven-a-side-plus-one-large team. The Orc's has an Ogre, subject to stupidity. The Skaven had a Rat Ogre, wild and feral. It was Phil's first game of Blood Bowl and he won 2-0. Lewis was host and referee. He did a superb job of keeping the game moving without giving us too many hints. A lot of fun and there will be more games this season, without a doubt. I have some teams on their way to my painting bench this week.

I was inspired this week to get some of the unfinished Lord of the Rings miniatures out of the drawers. Partly because we watched the Hobbit: Desolation of Smaug again this week but mostly because I read Scott Bowman's post about Blanco, the amazing horse who was Shadowfax in the Peter Jackson films. In memory of The Lord of Horses, I dug out my superb miniature of Gandalf the White riding Shadowfax. This miniature in particular has spent a good decade gathering dust. It was good to finally give it a well deserved paint in honour of such a superb steed.

Thanks again to Sofie! This is Painting Table Saturday, number 23! 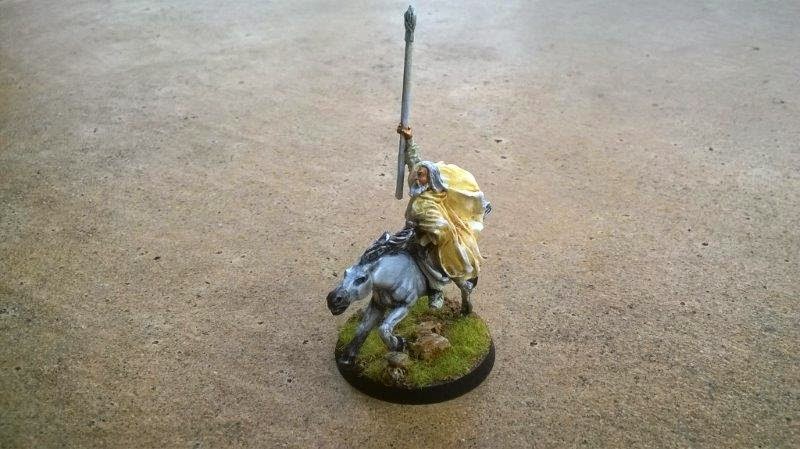 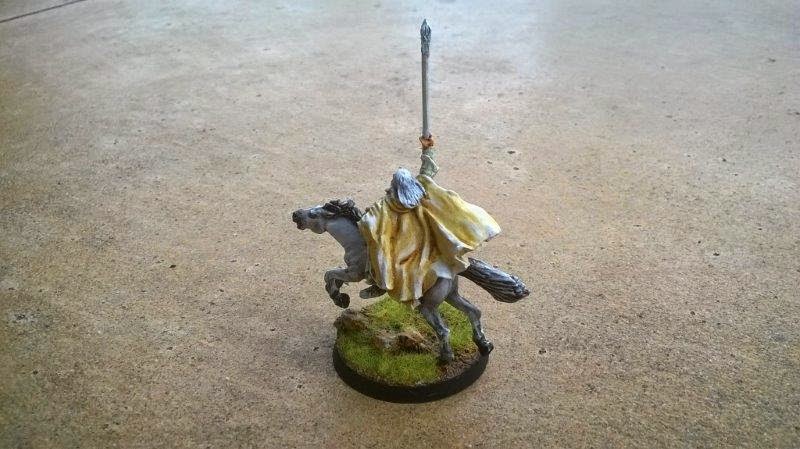 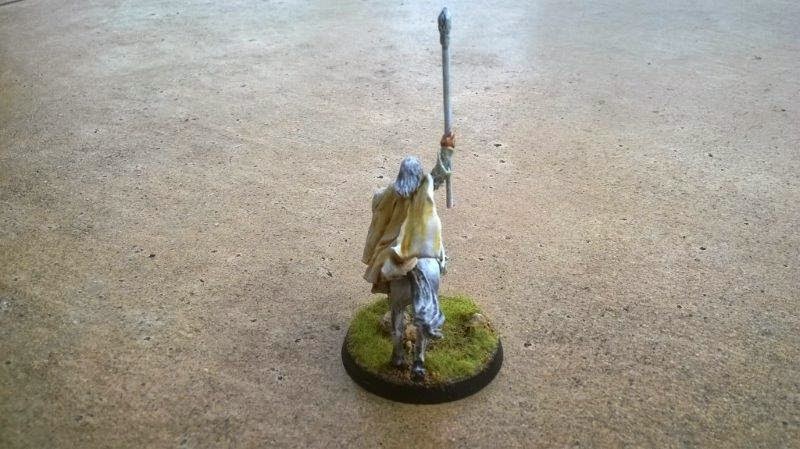 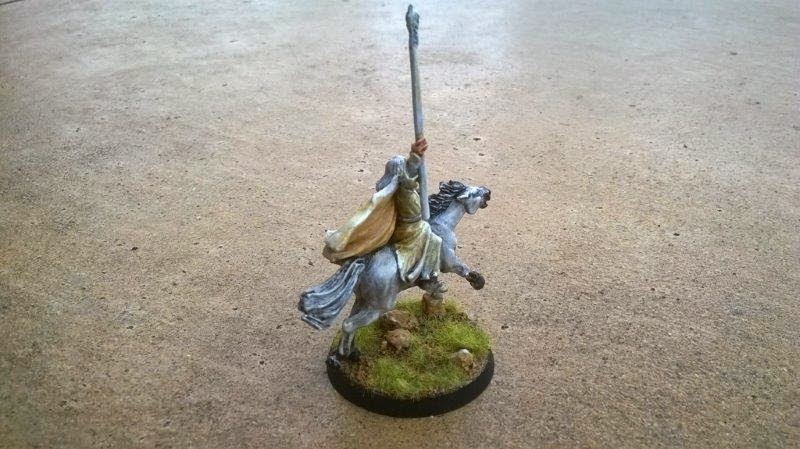 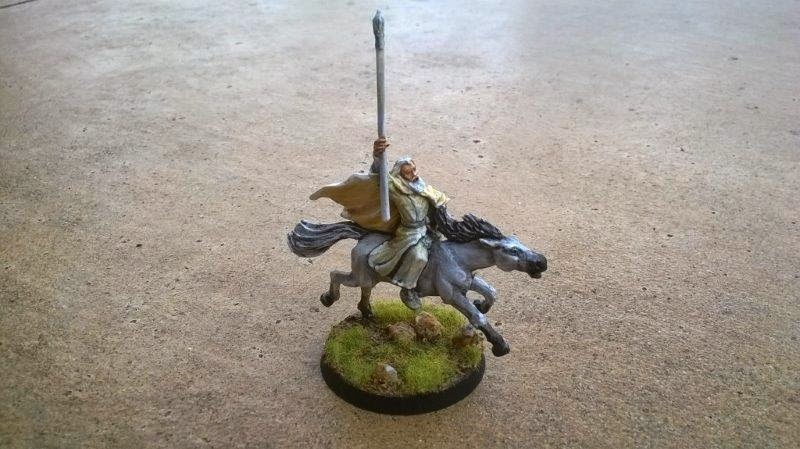 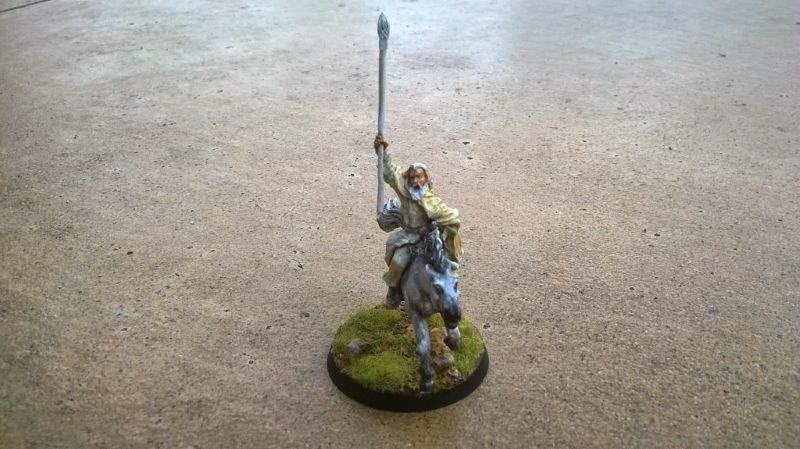